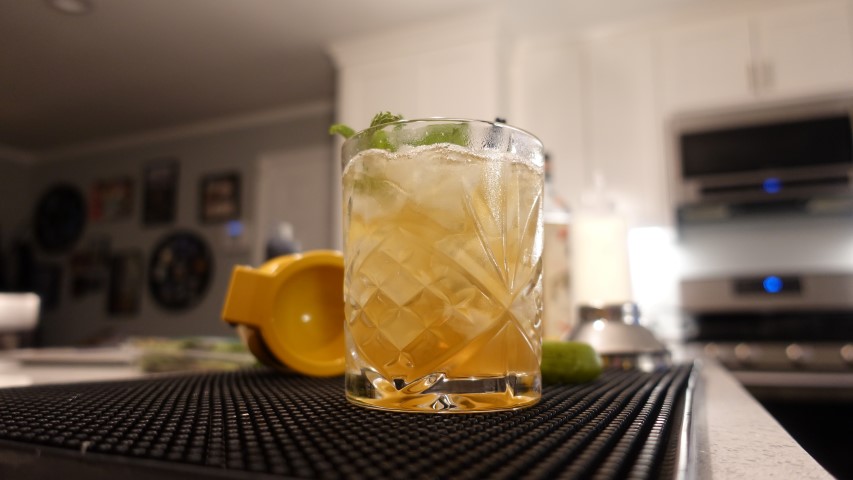 The Mai Tai: a postmodern classic that was once the pinnacle drink of tiki culture long before it became a tourist trap. A booze-forward concoction dreamed up in the 1940s, this drink features warm, subtle notes of orange with the sweetness of almonds on the back end, and brightened with a heavy dose of lime. Slap some mint on your hand and insert as a garnish, and you have a libation that is truly out of this world (which is the loose translation of the Tahitian word “Mai Tai”).

Unfortunately, it’s unlikely you’ll end up with the drink I just described at the majority of establishments. In fact, there’s no telling what you’ll get when you order a Mai Tai at the majority of establishments. Over the years, it has taken on a number of different shapes, sizes and colors. Some are pink and tall, others are nearly blue, while others are bright yellow. And some have that ominous dark rum float on the top, which is an odd thing to add to an already potent punch.

The problem with all of these, even if you love sticky, sweet jungle-juice cocktails with cheesy garnishes and umbrellas, is they aren’t Mai Tais. And this is not about semantics. It’s about respecting the classic. When you order a Mai Tai you should get a Mai Tai. You wouldn’t, for example, be happy receiving a Mimosa after ordering a glass of Champagne. Sure, some of those drinks in the recipes above might be good, but they are decidedly NOT Mai Tais.

So are you saying I should just never order a Mai Tai?

I’m not saying that at all. It’s your right as a human being to immerse yourself in all the sweet and sticky libations you can handle, especially when it comes to tiki themed bars and restaurants. There’s a reason why tiki was so popular in the mid-20th century and there’s a reason why it’s coming back now.

In fact, if you’re in Hawaii, buy your tickets to a luau and slug back as many improperly spun Mai Tais as possible because that’s your job as a vacationer and you deserve it. While you’re at it, go full-tourist and get one of those giant volcano drinks they set on fire, or a giant pineapple filled with booze and juice. And if you’re in San Francisco, be sure to drop into Li Po Lounge over in Chinatown and have a Chinese Mai Tai, an utterly unique and fantastic libation you will find nowhere else.

Because this, my friends, is what life is all about. Cheesy or otherwise, I can’t tell you how happy I am this movement is coming back. I only ask that you at least find a legit place and gift your lips the outstanding pleasure of tasting a classic, proper Mai Tai—the way it was intended to be.

It is, after all, in this imbiber’s opinion, one of the absolute best cocktails ever imagined. But only when adhering to the correct recipe.

What is the correct recipe?

There is some debate over who invented the drink. Some give credit to Don the Beachcomber—the celebrated father of tiki culture—while others side with Victor Jules Bergeron, Jr., better known as the man behind Trader Vic’s. Consenting opinion favors the latter, and it’s his recipe that has withstood the test of time because it is, for lack of better explanation, far superior.

Straight from the horse’s mouth:

I took down a bottle of 17-year old Jamaican J. Wray Nephew rum, added fresh lime, some Orange Curacao from Holland, a dash of Rock Candy syrup, and a dollop of French Orgeat, for its subtle flavor. A generous amount of shaved ice and vigorous shaking by hand produced the marriage I was after.

Half the lime shell went in for color … I stuck in a branch of fresh mint and gave two of them to Ham and Carrie Guild, friends from Tahiti, who were there that night.

Carrie took a sip and said, “It’s Mai Tai – Roa Ae!” In Tahitian this means “Out of this World – The Best”. Well, that was that. I named the drink “Mai Tai”.

Sounds good, right? Here’s the thing: you’ll never be able to taste it. Vic claimed that due to the popularity of his Mai Tai, he exhausted Nephew’s entire supply of 17-year old rum. And then exhausted the entire supply of their 15-year old version.

To keep up, the distillery had no choice but to alter the recipe. As such, an original bottle of 17-year is impossible to find. And if you do stumble across one, of which there are a reported four in existence, you’d be about $55,000 richer.

The good news is that there is no shortage of rum in the world. And with the culture of tiki at full bloom, reputable liquor stores are increasing their stock. That is to say, we have a variety to choose from.

Which rum should I use?

That, my friends, is what makes this drink so special. The choice is completely yours. The only thing that matters is that you buy quality, aged rum. You don’t have to spend $80 on a bottle, since that’s meant for sipping, but definitely reach for a rum that’s at least seven years old. Twelve is even better.

And before buying, you might want to do some research on what aging actually means when it comes to rum. It also wouldn’t be a terrible idea to find an establishment that carries a large stock for you to taste. There is no substitute for experience and it’s all about what you like.

I’ve fiddled around with seven or eight combinations and have happily settled on a few that I love. There are a lot of others I want to try but I only have so much cabinet space and, well, money to spend on booze. But if you want to really nerd out, check out Rumdood’s “A Month of Mai Tais”, where he and a few other bloggers put together 48 combinations!

After a bit of experimenting, the one rum that I believe is absolutely necessary is Appleton Estate’s 12-year, and I think a lot of purists would agree with me. It’s dark, bold and somewhat bitter but warm and slightly smoky—exactly what’s required to cut through the lime and sweetness of a Mai Tai. Even straight, it’s smoother than most rums I’ve tried in its price range, which is about $30 a bottle depending on where you live.

Next, I found the Kirk and Sweeney 12-year to be a perfect companion. The blend of the two caters to the slight nuttiness and boldness of a Mai Tai without stepping all over the cheerful citrus and sweet we’ve grown to love. I can only imagine topping this combination by spending a little bit more cash and buying the 18-year version of both.

As for orange, I’m sure pouring in some Grand Marnier or Cointreau would be delightful, but those are best reserved for margaritas. We want our orange, in this case, to cut through and actually be less smooth (to a certain extent). For that, I turn to Pierre Ferrand Dry Curaçao. It’s a simply fantastic orange liqueur that sizzles and shines in this drink. In fact, it’s a fine substitution for the aforementioned Marnier or Cointreau in nearly every cocktail for half the Clams. Perfect.

I also use standard simple syrup and not rock candy syrup, which is a 2:1 ratio of sugar and water. This is ultimately dealer’s choice. The rock candy would help with the viscosity of the drink, but I fear the added sweetness would be too much for my liking.

And finally, the orgeat. Orgeat is almond syrup and you cannot make a Mai Tai without it. Plain and simple. You can buy a fancy version, make your own, or there’s Torani which just happens to ship via Amazon Prime for about $11. But you absolutely must have it for this cocktail.

Oh, and this should go without saying, but always use fresh lime juice. Always. Seriously. You might as well dump your rum down the drain if you use that bottled crap from the grocery store. This is true of every cocktail.

Mix all ingredients and shake with ice. Pour over ice. Smack some mint on your hand to release its oils and insert as a garnish with a half of a cashed lime.

The ratios stated are yours to play with. If you want less citrus burn and more sweet, go for it. If you’d rather use all orgeat and no simple syrup, by all means. The great thing about cocktails is you get to do whatever you want, just as long as you don’t kill the classic.