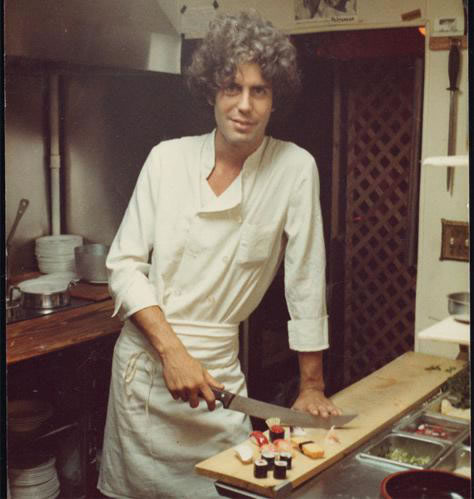 I wasn’t sure what to expect. I wasn’t sure why my wife and I spent over $140—cheap seats in this circus—to see a man that’s neither a musician nor a an entertainer, not even so much as a comedian or inspirational talker. It’s not like he’s going to cook Nashville’s TPAC theatre, all 2,300 of us, a five-course meal. I mean, who even is this person.

How do you explain Anthony Bourdain? How do you wrap words around a man that probably should have washed away in his 40s as a folklore chef in New York—long before his travel adventures captured our high definition imaginations and three out of eleven Emmy nominations?

If you’re in the industry the answer comes easy. You’re already cooking up descriptions and personal inspirations of how he energizes who you are and who you want to be. You’ve read Kitchen Confidential, which is equal parts a launching point and a divine intervention for his post-chef career.

If you’re not in the industry, you’ve likely been inspired by his travel experiences and hope to apply them to your own. You admire where he’s gone, how he’s gone there and hope to be as courageous and as indigenous to the Parts you’ll eventually explore.

If you’re somewhere in-between, you’ll likely tell your friends to not say the word fuck in public. And that’s perfectly okay. There is something for you too.

The restaurant industry is a cruel, unusual and beautiful landscape. The hours are long. The natives are unstable. The pay is crap. But the end result is a perfect trio of art, love and labor. Anyone that’s in it now will tell you to stay out of it. Anyone that actually found a way out of it will tell you they miss it.

So when Bourdain took stage to the expected amount of rousing applause in his first of 10 shows, it didn’t come with a soft entrance followed by guiltless publicity: “Hi. My name is Anthony Bourdain and you may remember me from such shows as…”

No, he enters and places a Yazoo Pale Ale on a stool center stage and we’re immediately informed of his nightmare from the night before: Guy Fieri.

For the better part of 10 minutes we’re simmered in excruciating detail of the network star turned 600-pound gorilla (or, as Bourdain described him, like Billy Idol fucked a panda). As you know, a 600-pound gorilla gets to sit wherever it damn well pleases.

But the realities of the industry are far from glamorous. That’s not an angle Bourdain’s recent shows have addressed. Still, you could see his disdain for the celebritization of cooking culture.

There is nothing glamorous about working nights and weekends while friends eat and drink, inheriting scars from weekly cuts, burns and bruises, or smelling onions and garlic on your fingers even after multiple showers. Soon, after grinding out understaffed shifts with underpaid coworkers while dealing with the highest demands from both clients and bosses—all while keeping a smile on your face—you realize that the only friends you have are those that get off work at the same time as you.

Everything else fades away. After that, you turn to chemical adventures. And if that ends up in an escapade with the two new servers on a Sunday night bender and you miss your shift the next day and get fired: well, it’s the restaurant industry. You’ll always have a job somewhere.

Bourdain spares us of these details during his short few hours on stage; mostly because he knows we know them, or knows that, if we don’t, it’s not why we came to see him. Instead, he bobbed around, hovering over his Yazoo—not once picking it up—and unapologetically buttering us up with Bourdainian philosophies and experiences. Should you take any minute of it out of context you’d have defamation lawyers sending you emails. The man equated Man vs Food to ISIS recruiting. Dinner Impossible? How about “what any reputable catering company does everyday damn day?” Paula Deen? Too easy but we went there too. And she deserved it.

The context in question, the purpose if you will, had a broader stroke than just celebrity chefs free ranging across network shows and hoping to never again have to operate across the unforgiving tiles of owning, managing and directing a restaurant. It spoke to America as a whole. Bourdain spared no fat when chewing through American politics and our dependency on excessiveness and the Second Amendment.

He also never slighted either aspect while admitting he’s a part of the system. He is, in fact, a celebrity and, whether he will ever come out and say it, a role model. He is a family man. His wife has a purple belt in Brazilian jui-jitsu. He, at brief moments, showed sympathy for his fellow celebrity chefs—celebrities in general. But he has been able to set himself apart by never changing his views unless his views were incorrect, which seems simple on the surface until you have a long-winded conversation with a sheltered opinion. Traveling the world has that effect on a person. His experiences are documented with unrepentant results—both the successful and the unsuccessful.

He is, after all, a failed chef, more or less, that catapulted his way out of the restaurant industry into the industry of restaurants and the cities that host them. Would you take advice from this man? If your answer is no, then you’ll be disappointed when a great many of us pencil him in as VP to Jon Stewart (#StewartBourdain2016)

During various moments the crowd mumbled and laughed and returned to uncomfortable bouts of silence. Bourdain himself looked uncomfortable at times. Clearly, he was rehearsed but not so rehearsed that it seemed scripted. Just rehearsed enough that towards the end of his punch lines he would drift back over to what was obviously a notebook with bulleted ideas and talking points to refocus: a script if you will.

But the best part of the show, as you would expect of any Bourdainian format, was the question and answer.

Here we find the unscripted Bourdain. The honest Bourdain (as if he wasn’t already overtly honest). The first question came in the form of a local man traveling to Cambodia. The question on the surface was simple. The answer… the answer I wish I could present to you in its entirety. Here, Bourdain shed his DGAF sentiment and settled into an earnest reflection of his experiences. Here, we saw the historian, the awareness, both political and cultural, of a man that’s been there and done that. And would happily do it again.

Bourdain took that question and turned it into a short history lesson filled with somber experiences. Yes, parts of the country need to be visited because they’re beautiful. Yes, the food is amazing. No, Cambodia hasn’t fully recovered and it’s not decorated in luxury travel and Wyndhams.

Next, an Iranian women took us even deeper questioning what he knows about the Iranian couple that was arrested after his show visited them in Iran. Bourdain batted the answer around while pacing across the stage before simply ending his answer with “a country is much more than its government; it’s the people who live there”.

Things got a lot more lighthearted after that. Questions poured in from all over Nashville’s TPAC of what I’m guessing was a sold out show. One of such questions came from an alleged industry person asking the age-old paradox of “Fuck, Marry, Kill”. The subjects, you ask? Why none other than Rachael Ray, Giada De Laurentiis and Alton Brown. Bourdain poetically turned this into a story of how Ray sent him a basket of fruit after he wrote, “I don’t know whether to go out and shoot a puppy, or send Rachael a fruit basket”. So whom would he marry and kill? Well, he’d marry Ray. And he’d kill De Laurentiis. I’ll leave the rest of the math to you.

Where we went from there is an experience best left without words. What Bourdain does better than anyone is take the good, the bad, the vulgar and uncomfortable and filter them into a wavelength we can all hear and see. From being a failed chef to being a professional traveler with a firm understanding of politics and history, what you see is what you would expect. But like with all life’s experiences, it’s the unexpected part that’s the most adventurous and most memorable. Bourdain and his crew have captured that with a cinematographic and unbiased perspective unrivaled by any other show or network.

He summarized it best by ending a tough question with the most purest and simplest answers anyone searching a brand should hope to achieve: “as it turns out, not giving a shit is a great business model”.

We got what we paid for.